As Raced In THE PAGID PERFORMANCE BRAKES SALOON CAR CUP 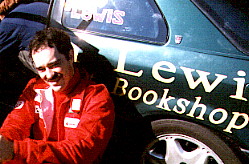 Built up in the spring of 1996 from an insurance write-off.The Shell has heavy damage to the left front and needed a great deal of work to straighten it out in addition to new inner and outer wings new front panels,bonnet, screen and various suspension componants. Fitted with

an ex Martin Bell Rover Turbo Cup series engine it replaced the ageing MG Montego Turbo which we had run to that point (scoring 1 win and several top 5 results the previous year). Debut at Castle Combe in the HANDYGAS SALOON CAR CUP (as it was then known) on July 12. Handling prooved awkward as the car had not been tested or set up prior to the race.Once the suspension was lowered and stiffened this ceased to be a problem but more power was needed to be a front runner.Fitting an air-water charge cooler in place of the air-air intercooler provided a hike in BHP and in the final race of the season-the car’s 5th it qualified on the front row and led from lights to flag,scoring fastest lap too.

1997 Season began with no modifications being done,the idea being “if it ain’t broke don’t fix it” but a practice accident caused major damage to both suspension and shell-from then on the team had to play catch-up,having spent time on repairs that was needed on development. Two more acidents(neither the driver’s fault),in following races then a major fault which began to develope in the ECU led to major engine damage and a lengthy winter rebuilt for 1998.Then a blown turbo in the second race after 6th at round one led to a further rebuild including the fitting of a Lumenition programable ECU which allows control of both fuel and ignition maps - this has taken a long time to fit and set up meaning we have only managed one more race in 1998 and the driver had toncilitis !

For 1999 there was a break from racing to allow for hard earned cash to be spent on renovating a new house (well 200 years old actually but new to us) in time for the wedding between Simon & Wendy in June of that year . Racing came second to all of that , naturally, so once we were installed in our house and reasonably settled it was time to think about running the Rover again. That didn't happen until August 2000 when we ran at a Curborough sprint event. That resulted in a class win but showed up a niggling misfire. Two events at Castle Combe were entered ;in the first one, having endured the misfire to a worse degree than before in practice the clutch cable snapped while lining up for the grid! No race. In September, the second of these events was even worse. Despite test runs seemingly showing the problem was cured, it returned once again. The engine cut out during practice, spinning the car backwards into the wall and crumpling the back panels..... again no race!

We suffered a string of serious family related problems (berevements, divorce and illness) which stopped work on the car in early 2001 and sadly thats as far as things went - for now! The 220 is still in the garage and awaiting time and cash to make it live again so as Arnold Schwarzenegger said in TERMINATOR   "I'll be back" so watch this space! 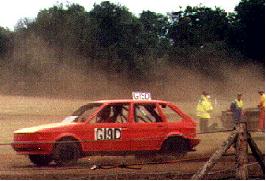 IN 1998 - 99 I tried my hand at Autograss racing in a Class 6 (unlimited front wheel drive) MG Maestro - which was a car I raced once at Silverstone but was so bad that it never ventured out for a second race! Autograss comprises short(4 or 5 lap) races on a quarter mile dirt oval - the “grass” lasts about 1 race before it’s chewed up.Two heat for each driver produce 8 or 10 qualifiers for the final.

In 1998 two events were entered and results were no exactly spectacular as the car was little more than a road car with all the safty mods applied and no tuning or lightening. In 1999 we were planning quite a good season but the first event was rained off as were a few others so in the end just three meetings were completed.

11 cars in class 6, nice dry day on a fresh grassy field.Generally good fun. Finished 4th in heat 1, 6th in heat 2 and would have been 4th in the final but for the ECU playing up and cutting the electrics.2 minutes after retireing it refired no problem. ECU replaced for next event!!!

The car had a lot of metal removed after this event and now sports a much improved rear suspension and considerably less weight.Not much has been done to the engine, we figured it has boiled dry 4 times so far and can't be long for this world .It hardly seems worthwhile spending money on it .... but at least it is a willing old thing even if it only gives about 100BHP where some of the 16V Vauxhall engines running in class 6 must give well over twice that.

Heat 2, better start,third into first bend, passed one ,the other retired (team mate Dave Tuffin on his debut with a newly built Rover 216 turbo) and won comfortably. Yipeeeeee!

Final, did not start due to breaking an engine mounting in the last heat.....damn!!!!!

Good venue, good turn out of cars, rather heavy on the water however.!

First off the line in heat 1 but a slight fluff of the engine had me mid pack in turn one and it had just been watered.... everyone went into the fence... all rejoined and I finished 4th.

Heat 2, better start but 5th on lap one, up to 4th on lap two and got into a scrap for 2nd and 3rd . Using my favoured tight line I just sneaked inside for 2nd place at the flag, upsetting the 3rd place finisher who despite driving into me twice(once after the flag) claimed I was the one who was driving dirty! Some people eh?

Final , bad start but still 4th for much of the race with the top 5 all nose to tail untill the 3rd place car clipped a tyre and did a superb cartwheel - roll to bring out the red flags. I had passed him as he was in mid air but the result stood from th previous lap. 4th.

2000 Season never happened. No time due to my increasing journalistic projects that included reporting Le Mans, the F1 testing, Silverstone ALMS, Donington Sports-Racing World cup and Goodwood Festival of Speed for a news agency in europe..... but 2001 might well see a return as the car is still tucked away ready to race again at a few moments notice.

THE TUFFIN ROVER. built by

ASHLEY LEWIS RACING over the winter of 98-99 was a very unusual car to use but it had the benefit of being very cheap to get hold of! It's the old shape 216 (a rebadged,re-engined Honda really)with a Turbo from a Montego Turbo grafted onto it's single OHC engine.LOTS of metal was emoved from the floorpan,boot and inner side of the wings.It was light enough that you could lift the tail off the ground on your own. The car had very little running before it's debut and Dave Tuffin had only done one event before. Never the less he is a mad bugger and looked very spectacular at Cwmdu.....

Fuel pipe blockages (maybe caused by a foam filled tank breaking down) caused it to conk out while leading heat 2 but it was very very fast off the line so success looked not for away until other commitments meant DT's career got put on hold right after that event.

The car languished at Ashley Lewis's unit for a year before being sold off and apparently has proved pretty quick with it's new owner. Who is it? No idea. Wish I did!

Sadly life got tricky in 2000 and the Autograss car ended up being disposed of as there was no longer time to devote to it.

Our first effort in the class, but due to restrictions on our time we did just two events

The debut meeting was Breedon Hill's rather disasterous July session .A drawn out affair on a dry dusty track .It was filled with delays and generally not that much fun despite me qualifying for the final .I finished 7th after being seriously delayed when a VW Golf ahead of me stopped bang on the line and I had to stand on everything to avoid a big impact.The track rutted so badly that no other events were held there after that and the club moved to a new site for this year.

The second meeting was on a damp track run by Hereford Club in September. The venue got got rained on more and more throughout the day .I shared the driving with brother-in-law to-be,Dave Tuffin and the event was brilliant fun! The slippery conditions were great to fling the car about on.Despite getting two holes in the radiator(successfully blocked,thank goodness) and a few hefty dents from a couple of rather erratic fellow competitors who used the back of our car as a brake we loved every moment. The car remained one of the heaviest and least developed in it's class but that would not be the case for long! Thanks to the very cheap cost of actually entering(Ł3.50 per person coming through the gates,irrespective of wether they driver of just watch)it didn't break any banks to make the engine a little hotter and the shell a lot lighter.

If you have always fancied having a go at racing a car but thought it was too expensive to contemplate,a pretty good car can be bought for less than Ł750,the licence for Ł30 and the entry to each event is Ł3.50 per person ! Add a bit for petrol and travelling  and you can do an awefull lot of events in the season & still have change from a grand.

There is a web site on the sport  ,click http://www.petrolhead.mcmail.com/ for details.