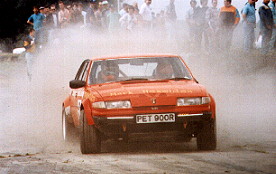 Simon Lewis, car book mogul and now saloon car racer used to compete in rallies, before finding that circuit racing was a bit cheaper and a whole lot easier to organise! That was from 1991-1994 and throughout that time, the team comprised driver   Simon, mechanic & manager Ashley, assistant Pete and Navigators Ian and Phil (interchangeable depending which had the money to contribute to the funds at the time.) They were blindly loyal to the products of Rover running two SD1 V8s,then shoe-horning the 4.5 litre engine that they had built up into a Ford Escort Mk3 shell (converted to rear wheel drive).....that was quite a beast .Results would have been easier with say, a Sunbeam or a normal Escort, but that has never been their style - they liked to do things the hard way!

The team never won outright and the best overall place was 11th,but by then the entries were in the 80 car bracket and the top runners had Ecsort Cosworth,Subaru Imprezza, MG 6R4 and other 4wd exotics that could trample the old SD1 underfoot at will.Best ever stage time was 5th overall and that was quite satisfying at the time as many of the cars around them were in the  Ł50,000 plus bracket ,Their humble effort was aimed at getting a personal-best result and a few class awards. There were a few second place trophies ,a few third places and a lot of fun in getting them .Best ever was 2nd in class on the K&N national rally but at the cost of 9 ruined tyres and some Ł80 worth of petrol! By the time the Escort-Rover had consumed it's third set of head gaskets in as many events (all due to them being a bad batch), Simon and Ashley  had decided to switch to circuit racing. See SIMON LEWIS RACING page for more on that!

He's back! The famous,the legendary the one and only, ladies and gentlemen I present to you Rob Richards .

He's rallying again after a long lay off from the sport.Those of you who havn't heard of him - where have you been? Back in the 80's the name was known all through the rallying world... well mainly in the south west and in wales actually,but it was well known,take it from me! Then it was his exploits on road rallies and as navigator to Michael Davis and the almost equally legendary "Frog"  that made him a folk hero,as well as crazy antics with hire cars,odd and extreamly odd road accidents and the ability to wreck cars almost by 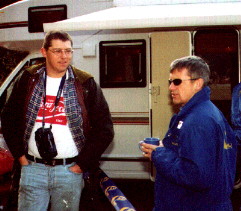 looking at them.Even Colin McRae's navigator, world champion Nicky Grist once looked at Rob and said "I Know you don't I - bloody hell it's Frog's mate!" on the right you see the famous Mr Grist and the Legendary Mr Richards in conversation at last year's Network Q Rally Of Great Britain (I preffered "RAC Rally" it was easier to say...)

Now he's back ! A family man but no less the legend he once was.Now he's the driver in stage events and soon in sprints and hillclimbs too so you have been warned! Miss his crowd pleasing antics in the 1600 Sunbeam at your peril!

First time out in the little "Beam" was at Brean Holiday Park stages and a decent 4th in class was achieved.Modifications were carried out before the most resent event at Davidstow netted third - though being of legendary status and thus not doing things like normal mortals, Mr Richards assumed he was 4th and went home - not noticing the chap ahead had retired and not realising there was a trophy to collect until the results dropped through his letterbox several days later.

Further appearances were put off when wife Alison announced a baby was on the way and no doubt the proud dad-to-be was planning the name of his new offspring if it was a boy - something like Colin McRae Subaru Richards,but Alison had a little girl and they've named her Chloe instead(much nicer!)

1999 started with a new engine, lots of detail modifications to the car and Rob in very bouyant mood,quite certain he would trash anything that came his way in the 1600 class....

Then cam the Brean Leisure Park stages in Februrary and that brought him down to earth a bit. The car was faster than last year and even the navigator reckoned Rob was going much quicker than before but the result was a disappiointing 10th in class (it was a very well populated class which didn't help..). The main problem was a influx of very quick 16v powered 1600cc cars including no less than a Lotus 7 twin cam ! Rob's poor little ohc 8v Sunbeam was never going to match that with it's standard brakes .

So, what to do now? A planned run on the Caerwent event at the end of March has been canned while Rob saves his pennies for a secret new engine of the twin cam-and-lots-of- valves variety.The Legend will be back, have now fear,but he now realises ageing 8valve engines are not going to win him many pots. Stay tuned...

Tales of Rob Richards may be added to this page from time to time when ever the author has the chance to write down any of the great man's endless rally stories for posterity.Here is the first...

Once upon a time in a county slightly to the north of Gloucestershire, the legen had to transport his Sunbeam Lotus back home to the Forest of Dean. Coming off the M42 and onto the M5 in his ex DTV,Saftey Devices built Bedford CF Van, fully loaded down with the Sunbeam on the back, he came across an XR2 that decided to race him... you know the sort, you pull out to pass and he goes from 45 mph to 70 with you alongside saying rude things about him...

Now the Legend likes a challenge (references to Mrs Legend have been deleted here to protect the writer from her wrath.) so our hero dropped the CF down a cog  and passed the "Fester" only for a bright blue light to be seen in his rear view miror a few moments later. A nice man in a hat with checkered flag effect around it beckoned to the Legend to pull over and have a chat... 104 mph with a CF,towing a Sunbeam in the outside lane concerned the nice man and he handed out a big fine and got our hero banned from driving at the peak of his career.

Told you he was a nut didn't we!

The Legend and Frog decided to have a go at the Plains National rally in a Group N Astra.On the friday before the event they suddenly realised there was paperwork for neither car nor driver and 24 hours to get it sorted (organisation is not our man's best feature) nor was there a roll cage in the car....

Frog got the spanners out and attended to the car while the Legend raced off to Hemel Hempstead where the documantation had somehow got itself temporarily stuck. By 4am the cage was fitted and the right bits of paper were back in the Forest of Dean.Rob,Frog plus helpers Fred & Bletherin, all jumped in the van and headed off for Newtown in Welshest Wales for the scrutineering about three hours later.On the way to Raglan it was noticed that all bar the Legend had gone to sleep and such was the spirit of teamwork that he only decided to join them without first bringing the van to a halt!

A loud bang and the strange feeling of running down the road at 45 degrees to the horezontal awoke our slumbering hero who found the outside wheels of his van were running along the top of the Armco barrier on the centre reservation of the road.Total panic...I mean skillful driving...got everything back on the leval and they looked at the damage.All except Fred who was still asleep in the back covered in pot noodles, dislodged by the incident The steering was bent and after a heroic 5 mile battle to keep the thing running on the tarmac instead of the grass,they gave up and took the Astra off the trailer and drove it the rest of the way.

The car then failed scrutineering for an improperly fitted cage and  things got a bit strained. The legend got "arsy", the Frog got fired and Betheryn drove the van back. Fred was still asleep in his bed of pot noodles.

Not the best event all in all!

The veteran of stage and road rallies,of autocross and now of sprints is out for glory in 1999 with his new 16valve Vauxhall engined Escort G3.

The new car is an all-singing-all-dancing Gartrac shell with 220bhp plus ASHLEY LEWIS engine,"all the right bits"on the suspension,brakes and transmission plus a snazzy but controversial "kit car" roof wing to top it off.

A long and careful build programme at Ashley Lewis Racing meant the car's debut was not untill August and the Azmingher stages at Colerne.The cams supplied by an outside manufacturer,who shall remain nameless,were delivered with what turned out to be utterly inaccurate instructions for timing and when the car was put on the rolling road at MechRepairs it produced a lame 160bhp when it should have been 230! The rolling-road wizards spoted the problem,checked it out and decided the cam makers had supplied very duff information so worked it out for themselves and bingo,the power was there all the time!

an"original" way of carrying out the check - like downwind in a howling gale........result,one modified Coke can banged onto the exhaust and lots of colourful language(echoed by the 50 or 60 others who experienced similar problems).It rained,the car was new to Mike,the navigator couldn't see out of the steamed up windscreen and they took a wrong route and lost heaps of time.A later run in with someone claiming to be a local council official who just happened to be passing and just happened to think Mike's car was very noisy(and 6R4s were quiet......)ended with the car on it's trailer and the crew unhappy at being denied a day's sport through petty officialdom.

But will they be back in 1999? It looks doubtful. Mike has a new toy, a Rover V8 powered Land Rover Mk1.This has been debuted in a 4-Wheel-Drive trial near Much Marcle, Herefordshire in Februrary 1999.No results are available as we speak but the team ( Simon, Wendy, Ashley, Dave, Maxine & Mark) all had a great time watching "Dangerous" ploughing through mud and water while navigator "Fatty"Thomas, who's generous buld makes for two weight penalties in the same vehicle, yelled "Left a bit Michael....right a bit....clog down..." and other such encourageing words. Everyone thought it was such good fun that plans are already being made for more of the team to aquire similar vehicles and give him a lesson in how it should really be done!