THE DRAG RACE FOR 430MPH

Note- This Was Written Before Don Vesco Took The Record Over 450mph In October 2001 ! For That Story Click HERE

If jets and rockets leave you rather cold and the definition of a car is one that could...just could be driven down the street without incinerating the neighbours then you probably feel the "real" record is still for those vehicles driven through that miracle of human invention, the wheel! Well that record stood longer than any other. Despite 400mph being topped way back in 1947,speeds above that are in territory that only Campbell (Bluebird CN7 ), Teaque (Spirit of 76) the Summers Brothers (Goldenrod) AND JUST THIS YEAR, Don Vesco have entered on official back-to-back runs. A the seemingly insurmountable barrier exists just above 400mph for a wheel driven vehicle. How it can be so difficult to improve on seems difficult to behold. When Cobb ran took Napier Railton Mobil Special

one way at over 400 it was rare for a car that anyone of normal means could afford to do 70mph.The new breed of jet aircraft were just topping 600 mph and Grand Prix cars still ran on 1930’s technology. By the time Campbell had gone over 400 officially, the X15 rocket plane had touched the edge of space a 3000+mph you could by a 150mph E Type Jaguar for almost sensible money and GP cars were running tiny engines,effectively just 33% the size they were in 1947,but lapping much faster due to the lastest chassis developments.

By the time Al Teague had scraped 409,one could buy a road car that genuinely did over half that speed, if it had the space, and a top fuel dragster could top 300mph in 4 seconds with a mere 440 yards of acceleration. Vesco has now run 427 mph (although this is only officially a national record) but it was a long and arduous effort to reach that figure - it's taken many years of trying and hundreds of thousands of dollars. In 2000 the Burkland streamliner ran a very similar one-way pass but again, the team were unable to back it up.

That's three cars in recent years over 400mph, yet still the record hasn’t been upped by much more than 30mph in 5 decades of trying! There must be a physical law at work here,one relating speed to power,course length and track surface composition. Power should really be no problem with the gas turbines now in circulation but where is a suitable surface or a long enough unsuitable surface?

Don Vesco and Al Teague ,who have nibbled away at the record in recent years by slender margins. 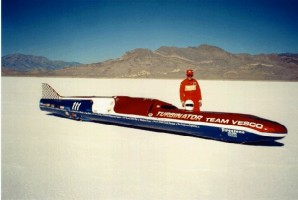 have gone by different routes. Teaque is the classic hot rod guru with an practicly antique,piston engined car that first run in the 70's and still boasts a single big V8 under the hood. Veteran motorcycle record holder Don Vesco's creation ,a 4 wheeled streamliner called "Turbinator", is much more state of the art, with gas turbine power from a helecopter, and this clocked a new wheel driven land speed record of 417mph in August 1999(still pending official confirmation at the time of writing,as is always the case with a new record) to top the 409 that Teague managed in 1992.The conditions on the salt were said to be so rough that Vesco could hardly see out of the cocpit as he reached the upper 300s.In October he upped the mark to a two-way average of 427mph,but no FIA approval was sought in advance so it will not, apparently,count in the overall standings.

The gas turbine engine offers an awefull lot of power for very little weight,and the potential is there for a much greater speed, if only they can run on a course that's smoother and longer that the depleted salt flats in Utah.

There are a promising bunch of projects all intent on beating Vesco.From England comes the similar turbine powered MILLENIUM which has been built and in fact displayed at the AUTOSPORT show a few years ago.It developed out of a two wheeled streamliner design which was never completed but a severe lack of money has put the whole thing a long way nehind it's original schedule while the owner/driver is away working in the north sea oil business I believe,to earn enough to self-fund it's evenutal record runs.

Another British effort is QUICKSILVER 500 the brainchild of motorcycle record breaker Alex McFadzian.As yet the project has progressed out of the limelight and how close to completion it is remains to be seen.Again it's turbine powered but where MILLENEUM, TURBINATOR and SPIRIT OF 76 (Teague's car) are all pencil slim narrow-track designs, QUICKSILVER has a more conventional look with outrigged wheels mich in the fashion of STUTZ BLACKHAWK back in the 20's.

Australia boasts not only Rosco's jet car but the twin Rolls-Royce meteor powered WOOMERA 1 .The car has been built and trial runs have taken place-but Lake Gairdner,the salt lake where Rosco has run and so have others including Al teague,is reluctant to dry itself out even under the baking Aussie sunshine.The will seems to have gone out of this project in recent months with news that it is for sale as a going concern. Can it make a genuine 400+ attempt? Perhaps the big question mark is have the unsupercharged engines,apparently from a Tank, and not in the first flush of youth, got the out-and-out power? The of course there is the matter of who will buy and run it?

Of course Al Teague himself brings out his 20 year old single engined streamliner every year at Bonneville and on a shoestring buget,runs high 300mph speeds,but that 410mph mark still eludes him and the salt conditions prevent a really long and suitable course from being marked out - if Lake Gairdner does dry,and Al can get the backing to run there....who knows?

Rather more .....unusual shall we say (I am picking my words carefully here) is the brainchild of former drag-engine guru Jocko Johnson,the wierd and wonderfull SPIRIT OF 29 PALMS.This slender arrow of a streamliner is intended to showcase a revolutionary engine desing which does away with most of the mechanical componants of a piston engine.The PowerRing unit is effectively a lot of tiny pistons operating on a multi-lobe central cam shaft with claims of wild power from tiny capacity and feather-weight. We shall see.There are some intersting web pages on this project but is it serious - check them out and form your own opinion - it might be a turning point in automotive history or a band wagon for selling team T-shirts..... just get your search engine looking for SPIRIT OF 29 PALMS and JOCKO JOHNSON. It's different!

BACK TO SPEED RECORD PAGE

BACK TO MOTOR SPORT FANATIC INDEX