WILLIAMS & HOW TO LOSE YOUR WORLD CHAMPION DRIVER

There is no doubt about it - when it comes to holding on to a top driver, Williams GP Engineering are  bottom of the pile on every count! Since 1980 the team have employed 8 world champions and all but two of them left the team after a bust-up!

Williams' ALL TIME FAVOURITE   was Alan Jones, their first world champion. He was truly a class act over the seasons 1979-81.But after his 1980 title ,ill luck prevented a decent chance of retaining it in 1981 and at the season's close he kept the team dangling for a long long time while he made up his mind wether or not to retire. He did indeed retire- temporarily and Frank Williams seems to have used this as his benchmark on "how to deal with your world champion driver" ever since .The ethic is "Fire him before he can walk away of his own accord!"

After Jones left,the new recruit,Keke Rosberg went out and won the title himself the very next year - despite recording just a single GP victory .Keke remained for 1983,84 and 85 before realising that the new-boy, Nigel Mansell,was going to be a bit too tough as a team mate in  his final year in F1,1986.The Brummie was hungry as a lion and maybe this led to Keke's move,to McLaren,or maybe Ron Dennis offered a better retirment fund than Frank Williams! Whatever it was,this proved to be the last time a Williams world champion bowed out without some sort of drama ,either comic ,tragic or plain silly!

Nigel Mansell was still ,in effect,a rookie when the new team leader was signed for 1986, Nelson Piquet.The firey Brazilian practical-joker was given a very tough time by the ever improving Mansell who , with two wins under his belt , was like a man -eating lion with the taste of blood on his tongue. Double world champion Piquet was employed in very much a No.1 capacity  in 1986 and was a big favourite of engine supplier Honda .But on most ocassions Nelson found himself being out-paced by Mansell - team orders

prevailed (though not  exactly admitted openly) and Piquet got the better treatment.Sadly for Honda and Williams they backed the wrong horse.Shackling Mansell eventually allowed arch rivals,McLaren & Alain Prost a lucky title win. The following season the McLaren was less of a threat and Williams had the openly hostile pairing of Mansell & Piquet in a dominant position all season.Honda wanted Nelson to win - that was what he was there for ,but Mansell was more than his match by now.Indeed AUTOSPORT were moved to write that, such was the lack of outright pace of Piquet campared to Mansell - and such was Mansell's apparent "luck "with wheels that fell off,engines that went pop and new bits that didn't quite find their way onto both cars at the same time ,that "The World championship will win Nelson Piquet"

.And it did,or he did...or whatever. Piquet was the champion,then promptly dumped Williams very quickly and took Honda engines with him to Lotus. Mansell remained at the team with an underpowered Judd engine in the car (above -left)  before being poached by Ferrari.

So,within two years,two world champions(one current,one future)had found the climate at Williams was less than appealing and walked out.Two season's followed in which little really went right - Mansell was brought back with a hefty pile of money to say "sorry" for his past treatement (they said it was wages,but make up your own mind!) and tested the 1990 car,quickly adjusted it to run several seconds a lap faster than it ever had before and left designer Patick Head to say(later, in print) that Williams had wasted all of the previous season for want of the man with the mustache!

Within two years Mansell ruled the world but Williams  had signed ex champion Prost,against his wishes .Understandably Mansell took it as an insult and walked off to more glory in the USA,leaving Williams looking stupid and minus another world champion at the start of the season.

They signed Damon Hill to appease the furious British press and fans only to find that he rapidly became a lot quicker than their controversial No.1 !  Renault no doubt found this accutely imbarissing,as Prost was their man and should have walked off to an easy title win. Instead Hill was frequently a cut above Alain but began to suffer convenient engine failures mid season, whilst leading the British GP for instance.This was odd, for the engine itself always proved a model of reliability, except when Hill was leading Prost.....This sounded like Mansell,Piquet & Honda all over again.

In the end,Prost was champion ,but stone me if Williams didn't sign Senna for 1994 - Prost's arch rival - so Prost walked off - champion No.5 had departed and for  the third time in a row the coveted  No.1 of the world champion  resided on a car other than the Williams in which it had been won! How imbarissing!

Poor Senna had no oportunity to fall out with the team,in fact he never finished a race for them before he died at Imola .Hill kept the team together and by all the laws of natural justice he was world champion in 1994 - except that Herr Schumacher rammed him at the final race in the most blatent piece of dirty driving ever seen in F1.In 1996 Hill got his revenge and the world title  - but was inexplicabley sacked  before the season's end to be replaced by H-H Frentzen(above) -a man with no GP wins to his name and not many points.The mind boggled then and it continues to boggle after HHF managed just one win in two season's- before he too got fired.In the same two seasons,Hill,forced into the never-won-yet teams of Arrows & Jordan,made HHFs employment look totally bizarre.Without the benefit of a Williams Renault,he equalled the win- tally of his replacment !

With Hill gone,Villeneuve won the title in 1997 ,

argued with the team over how things were being handled and the lack of speed in the lucklustre 98 car and announced he was off to BAR before the season was much more than half over.The first driver since Rosberg to earn,then actually RACE the No.1 on a Williams,wasaway on his toes,speaking volumes for how much his work was appreciated by the team.

He was the 7th  champion to leave under a cloud.Now surely there is 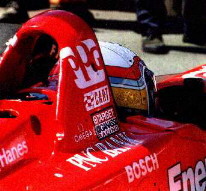 Zanardi was in the hottest of hot seats for 1999 and guess what? the absolute mega-star of CART racing for the previous two years, a racer's racer,had a shockingly poor year and never even had a chance to see out his two year contract! Was it that the Italian had suddenly lost his ability? Was it that the whole enviroment of the team was wrong for this normally happy, freindly character? Was it that the 1999 Williams was such a dog it had to be fueled on Pedigree? Whatever, he scored no points and in came a replacment. Now the replacment was sensational. Jenson Button. Now if you have a young driver who has gained massive PR and a hat full of points, major respect and a line of hungry team managers after his signature in no time. Do you replace him with another novice? Another CART driver who not only mirrored Zanardi's speed and performance but even drove for the same team? You do if you are Williams! Bye bye Jenson, Hello Juan Pablo Montoya! Mind your back Juan.......!!!

back to MOTOR SPORT FANATIC index

For a Ton Of Grand Prix links Take A Look At Formula 1 Links Heaven!

Masses of F1 and other motor sport links At TEN TENTHS

You Are Visitor Number

SINCE THIS COUNTER WAS INSTALLED ON NOVEMBER 9 1998